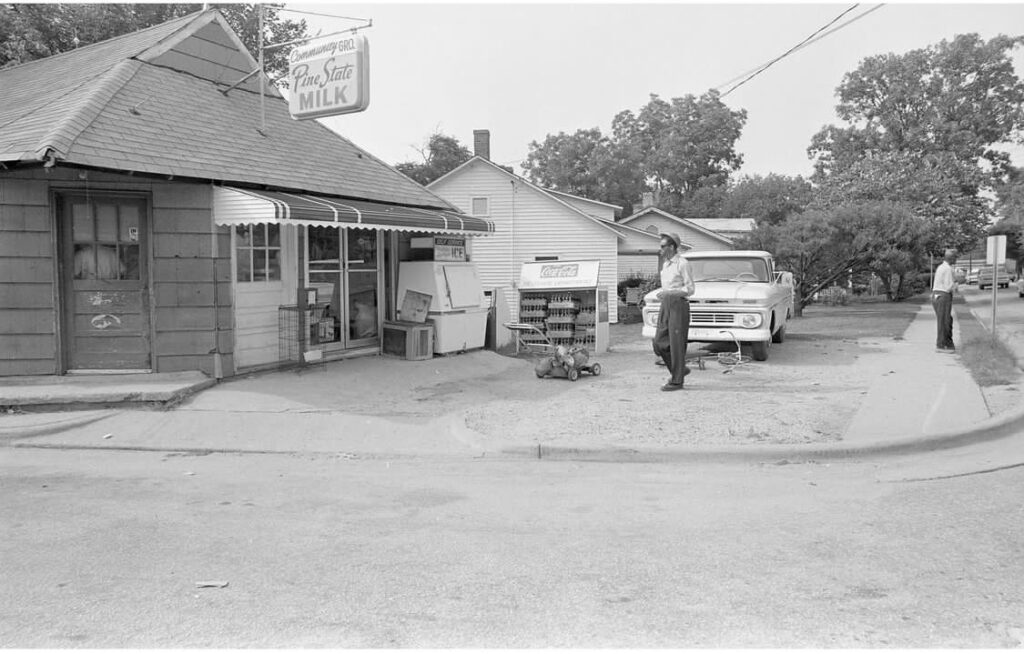 Porches became prevalent during the mid-1880’s in American communities. Oberlin Village was no different. Many homes, large and small, had porches with swings or large wrap around porches like the one at the Turner House. At 616 Oberlin Road where the Peebles family lived, the porch in this small A-frame home was an extension of the living room. Guests from out of town were entertained on the porch. In the evenings neighbors gathered from the Rollins home, at 618 Oberlin Road, and the Smith home, at 614 Oberlin Road, for socializing, telling ghost stories, churning homemade ice cream or watching lightning bugs. (Those properties are now occupied by the 616 Village apartment complex.)

-Story by Ann Sides from the 2013 University Park HOA Newsletter

(photo: Letitia Nedab, Jennette Harris, and Mary Haywood)
When Letitia and Jeannette Fields were little girls, they skipped through meadows of trees and wildflowers where the Cameron Village shopping center now stands. Letitia remembers Bedford Avenue surfaced with hard clay and stones. Jeannette recalls a sawmill east of Oberlin road, and a stand of Christmas trees where apartments and shops exist now. Most of all, however, the octogenarian sisters remember the vibrant community spirit of Oberlin Village, a historic African-American settlement where children were brought up to value hard work, education, and family relationships.

The home in which Letitia Fields Nedab and Jeannette Fields Harris grew up still stands, at 802 Oberlin Road. From the wide, shady veranda of this attractive, 19th Century house, Letitia and Jeannette went on to careers as teachers and administrators in the Washington D.C., public schools, but never forgot their roots in Raleigh.

“Oberlin Village was founded by freed slaves just after the Civil War,” Jeannette explains. “Our forefathers had a great concern for education, and we had a school here in Oberlin Village in 1869, seven years before the first public school opened in Raleigh.”

The residents, Letitia adds, opted to name their community and its main street “Oberlin,” because the Ohio college welcomed former slaves, and one of the village founders, James E. Harris, was a graduate. On a large tract of land on Parker Street, Rev. M.L. Latta established an orphanage and vocational school called “Latta University” in 1892. Dr. James E. Shepard, an Oberlin Village native and relative of the Fields sisters’ mother, founded North Carolina Central University in 1909.

In the 30’s and 40’s when the Fields sisters were growing up, Oberlin Village was a thickly-settled, self-contained, African-American community. The 12 block area comprised approximately 1,000 people in 175 homes, plus stores, workshops, churches, and a cemetery. However, westward growth of Raleigh and its commerce, particularly the Cameron Village shopping center, began to eat into the boundaries of the Oberlin community in the 1950’s. Desegregation brought more housing choices for blacks. Young people went off to college, and didn’t return to Oberlin Village, Letitia says, “not realizing its value.”

Oberlin Village is now a subdivision at the northeast corner of the
University Park Homeowner’s Association boundaries, and has a diverse population of students, renters, and homeowners. Descendants of the freedmen who settled the area still remain in the neighborhood, but their numbers are dwindling.

The Fields sisters, after successful careers as educators, returned
to Raleigh and joined community efforts to preserve Oberlin Village’s history and character. The neighborhood’s fight against a megadevelopment derisively called “Coker Towers” at Oberlin and Wade succeeded, but Letitia frets that the current building, Oberlin Court, encroaches the cemetery where her ancestors are buried. The sisters also point to efforts to preserve the cemetery and the Latta school property as examples of community activism; an alliance between the original families and newer arrivals.

“The newcomers, fortunately, have gotten into the nostalgia
mode,” Jeannette says, “and want to keep it as a walking neighborhood. I’d like them to experience the same warm feeling we experienced, growing up here.

Many older Oberlin Village residents have mentioned the Cook family as being important to the community.  There were actually two Cook families in Oberlin.  At this time, it is unknown if Jackey and Eliza Cook were related to each other but they were enslaved on Dr. Cook's plantation outside of town and lived in adjoining rooms. None of the records give Dr. Cook's name; however, Dr. William Cook, the principal of the North Carolina School for the Deaf and enslaver of 24 people, is a likely candidate.  Jackey's and Eliza's families kept in touch after Emancipation and eventually both resided in Oberlin Village.

Jackey (also spelled Jackie) served as a midwife on the Cook plantation and later nursed Mildred Mordecai at the now demolished Cameron house near St. Mary's School.  Her parents' names are unknown; however, her sister Maria lived on Martin Street near the Old Fairgrounds in 1871. Jackey was the mother of Priscilla Cook (Hunter) (1845 - 1917), Willis Haywood (1848 -1924), Mary Ortney Cook (Roberts) (b. 1850), William Henry Cook (b. 1852), Laura Cook (b. 1859). During the Civil War, Jackey married Solomon Nelson who was temporarily relocated to Wake County from Beaufort County, in an effort by his enslaver to escape the Union army.  After Emancipation, Solomon returned to the coast leaving Jackey and their son Charlie behind.  Jackey rode a train down east trying to find him but was unsuccessful. She supported her family and sent her children to school -- Charlie to the city's schools and Mary Ortney to Shaw University.

In 1871 while attending Shaw, Mary Ortney met and married Nicholas F. Roberts, a native of Northampton County.  He later taught at Shaw University and also edited the African Expositor newspaper, holding a place of high respect within Raleigh.

Eliza Cook (~1819 - aft. 1910) was also a nurse and after Emancipation and worked for Dr. Crawford. By 1899, she was listed in the city directory living in Oberlin with her son Edward (1857-1924), a plasterer.  In 1903, she purchased a lot in Oberlin. Eliza and her son Edward testified in the Nelson v. Hunter NC Supreme Court case, with transcripts containing details of life in Oberlin Village during the Reconstruction Era. Eliza's daughter Ada Cook Webb (1865-1942) was listed as the superintendent of the Colored Home in 1940 and the widow of Samuel Webb. Edward Cook was buried in Oberlin Cemetery. A former Oberlin resident mailed us her father's Norfolk Southern Railroad Chili recipe. Her father, Durell Rusher, Sr., was a warehouseman in 1946 and received rave reviews for this chili.

A retired Wake County school teacher and current member of Oberlin Baptist Church, Mrs. Jones celebrated her 106th birthday earlier this week. She formerly lived in Oberlin Village on Wade Avenue, but her family was forced to relocate due to the Wade Avenue - Oberlin Road interchange. Mrs. Jones was among the first parents to challenge segregation by applying for her daughter Grace Watts to attend Josephus Daniels Junior High School, along with the Holt and Farrar families, in the summer of 1956. Grace Watts, Thomasine Farrar, and Joseph Holt had just graduated from 8th grade at Oberlin School and the families wanted their children to attend the nearby school within walking distance of their homes. Mrs. Lucille Hope Jones Watts decided to withdraw Grace's application when it was insinuated that her teaching position might be in jeopardy.  We celebrate this Oberlin history maker and wish her a VERY HAPPY BIRTHDAY! "Gabriel has sounded the trumpet and the nations underground have awakened. "The Saints of Old" are rejoicing because a prestigious honor is being bestowed upon Oberlin Cemetery today."

Friends of Oberlin Cemetery,
We applaud you for your vision,
to protect this Oberlin Landmark.
What a wonderful decision!

GOD, In His Infinite Wisdom, always keeps a "ram in the bush,"
So He made a Divine choice to give your vision a push.
A vision to "break the chains" and "set the captives free,"
then proclaim this place historic for the OBERLIN COMMUNITY.

Has existed since the 1800s,
founded by freed slaves,
was always kept in pristine condition,
until forgottenness took over the graves.

Demonized by a sea of brokenness,
along with years of neglect,
when along came some special new friends
that they really didn’t expect.

These friends advocated for the speechless,
for all the world to see,
those unable to fend for themselves
as they lay covered in debris.

On Monday nights, once a month,
you met to discuss your plans,
to analyze and strategize,
seeking approval by the raising of hands.

You met with the city council
and cut through all the “red tape,”
still having to meet with the historic society
concerning this precious landscape.

Your vision was finally realized,
historic status has been granted
to our beloved OBERLIN CEMETERY,
what a loving seed you’ve planted.

FRIENDS OF OBERLIN CEMETERY,
What a marvelous job you’ve done!
You’ve run the race, you’ve kept the faith,
Now the VICTORY is won.